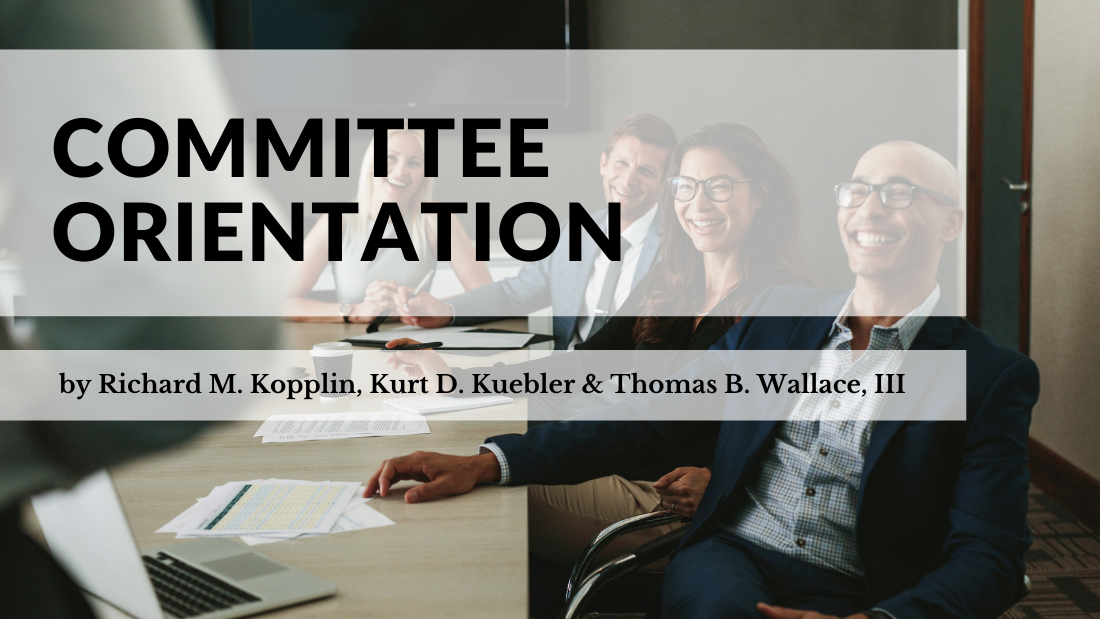 As KOPPLIN KUEBLER & WALLACE works with hundreds of clubs each year, we have discovered there is a big disconnect in the industry: Boards get all the education and training, and committees get very little, if any, education or training. This is a serious oversight because committees need to understand their area of focus and level of input. Just as board orientation is essential to the effectiveness of the board, committee orientation is essential to the effectiveness of committees, the board and the staff. When committees function properly, they are outstanding resources to be utilized while moving the club forward. When commit- tees are dysfunctional, they cause headaches for the general manager, department heads and the board.

When it comes to committees, volunteers should not enter their committee term thinking “What are we going to fix this year?” It should be explained to them, “This is the priority for the year ahead.” To guide committee members’ thinking, education and training are crucial.

MANDATORY IS A MUST

By conducting a board-like mandatory orientation session for all committee members at the beginning of the commit- tee year, every person sees what the goals are for the committees, how they will be held accountable, deadlines for when things need to be achieved and so forth. This way committees are not setting their own agendas, getting too involved in operations and setting their own initiatives, and there is much greater overall alignment throughout the club. Instead, committees are tasked by the president and the general manager, with the support of the board, what the goals are for the year.

It is a mandatory orientation and if you cannot make it, then you cannot sit on the committee.

If people do not come to the orientation, they do not take their role seriously and that’s when things can go off the rails. Furthermore, it is an ideal time to allow incoming committee members who have not yet served to shorten their first-year wonderment of how, when and where they need to focus their time. The dynamics of involving both new and returning committee members in the orientation experience is impactful and allows those new contributors confidence in what they need to focus on and how they can contribute.

Sometimes when committee members find out their roles are strictly advisory, and they do not have decision-making power, or they do not get to make certain changes (per their personal agenda), they do not want to be on the committee anymore. Those members with personal agendas are often the people that should not be on committees; that is why proper committee orientation and training is so important. Additionally, arming all committee members with factual data and not allowing unsupported opinions, no matter how well intended, to prevail is done at this stage of the orientation process.

Clubs should hold detailed committee orientation sessions at the start of the committee year, just as they do with the new board of directors. A mandatory orientation session should include a review of the club’s mission, vision and strategic plans. Carefully explain the “responsibility matrix” (see sample in Board Orientation article) and how each person’s role fits into the organization. Consider making copies of the responsibility matrix for committee members to take home with them so they can review it after the meeting and use it for reference throughout the year, or even having them sign off to acknowledge that they understand their role and how it fits into the decision-making process.

During orientation, detail the committee responsibilities, charters, the role of the committee chair, code of conduct, member grievance flow chart and any other documents vital to the club’s governance. Include core values and guiding principles that are the foundation of how you will operate. Just as you told the board, tell committees, “This is how we get the work of the club done,” to ensure they understand their role on a deeper level. These orientations should also include a full tour of both front and back of the house of the club in all areas, not just those under the purview of a particular committee. An educated member, often done in this manner, can be the best supporter of the club in the long run!

It might be overkill to provide the committees with some of the information that is provided in board orientations (such as the club master plan) but the more information committee members have up front the better. It is also great for other committees—the Finance Committee, for example— to hear what the goals and objectives are for the Tennis Committee, House Committee and Golf Committee during the orientation. When committee members know and understand their role in the organization, they are more effective and more efficient. Too many clubs are being managed by their committees and it’s because the industry doesn’t match committee training with board training.