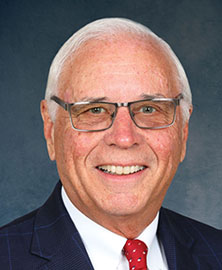 Dick started KOPPLIN SEARCH, INC. in 1996 following a 35-year career as a general manager and vice president for nationally recognized clubs, like Castle Pines in Castle Rock, CO, Desert Mountain in Scottsdale, AZ and PGA WEST in La Quinta, CA. His goal was to provide private clubs with an exemplary level of service in matching executive level candidates with private clubs and their culture through a more informed, researched, and educated process.

Dick also began a tradition for the Firm wherein a core foundation to its success is in its commitment to professional development, not only for its own Team, but more importantly for the industry and managers as a whole. In that vein, Dick has been one of the highest rated presenters at the CMAA World Conference on Club Management consistently since 2000. Drawing upon the hundreds of interviews, boardrooms and board retreats he has conducted, Dick is a sought-after keynote speaker on executive leadership, team development and the critically important “Board Dynamics/Model Clubs” program he developed many years ago to help boards and managers better identify and execute their roles and responsibilities in a successful and consistent manner.

Since that time, the firm has conducted over 1000 search assignments for many of the finest member-owned, developer-owned, golf, country, community-based, yacht, city, and athletic clubs in the country and worldwide. 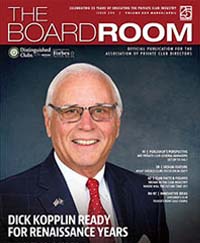 On behalf of the entire KK&W team, Dick we wanted to thank you for what you have accomplished and for allowing us to share it with you, offered Kurt D. Kuebler, CCM and Thomas B. Wallace III, CCM, CCE, ECM. We thought others might enjoy your story.

Congratulations to KOPPLIN KUEBLER & WALLACE’S founder, Mr. Richard M. Kopplin, who was inducted as a CMAA Fellow at the Club Management Association of America’s virtual World Conference and Club Business Expo, March 8-12, 2021. Dick is one of six club industry leaders who was selected for the 2021 class of Fellows.

Dick is the recipient of The BoardRoom Magazine’s Lifetime Achievement Award in 2011 and 2018.

Richard Kopplin Inducted into the Arizona Golf Hall of Fame

Richard Kopplin has been recognized for his career dedicated to the betterment of the private club industry and one of five new inductees to the Arizona Golf Hall of Fame held recently at the Induction Ceremony hosted at Paradise Valley Country Club.

Following a 35-year career as a general manager and vice president for nationally recognized clubs, Kopplin started Kopplin Search, Inc. over 23 years ago with the objective of assisting clubs in their search for skilled, competent staff. Today he leads KOPPLIN KUEBLER & WALLACE, a dynamic firm with a focus on executive searches, industry education and consulting.

KOPPLIN & KUEBLER emerged in 2007 as Kurt D. Kuebler, CCM joined the firm, and expanded to KOPPLIN KUEBLER & WALLACE with the addition of partner Thomas B. Wallace III, CCM, CCE, ECM in 2016.

A graduate of the University of Wisconsin at Eau Claire, Kopplin began his career in the private club industry by managing golf clubs in Wisconsin and Minnesota. His career continued as general manager and vice president of operations, including Castle Pines in Denver, CO, Desert Mountain in Scottsdale, AZ, and PGA West in LaQuinta, CA.

“Clearly, there are few in our club industry who are better known for their commitment to giving back and helping to develop both current and future leaders in all aspects of the golf experience,” expressed partner Kurt D. Kuebler, CCM.

“I met Dick when he was finishing his role at GM/COO at Desert Mountain, and he quickly offered his support and insights should I wish to have them, in order to be successful at nearby Desert Highlands. That initial and sincere offer has continued in the 20-plus years since, and in even greater depth when asked to join him at Kopplin Search, Inc. nearly 13 years ago. Since then, his style and genuine generosity has grown even stronger, not only for me, but for countless club professionals around the country! He’s the BEST!!”

“Dick is being duly recognized by the Arizona Golf Hall of Fame for his distinguished career and track record of going above the norm for golf and the club industry in the state of Arizona and throughout his career,” explained partner, Thomas B. Wallace III, CCM, CCE, ECM. “I have been privileged to watch firsthand the effect that he has had on club professionals through his leadership, mentorship and passion. I know this passion will continue into the future. Our team at KOPPLIN KUEBLER & WALLACE couldn’t be prouder of our dedicated leader.”

“Congratulations on your induction to the Arizona Golf Hall of Fame!” exclaimed Club Management Association of America President & CEO Jeff Morgan. “This honor stands as a true testament to the impact you have demonstrated throughout your tenure for private clubs and golf in Arizona.

“The mark you have made on a national level through your executive search business is even more impactful. Indeed, you have placed hundreds of club professionals who oversee top clubs across the nation, yet in my opinion, your legacy is that of helping to create better club leaders, deeper thinkers, and lifelong learners among club professionals and club board members. Leaders are Readers, as you so often share.

“Your legacy doesn’t stop there, as your energy, care and enthusiasm have extended into supporting non-profit organizations including those within the golf community, particularly those focused on our veterans, like Tee It Up for The Troops. Congratulations again on becoming a Hall of Famer!” In addition to Kopplin, the 2019 Arizona Golf Hall of Fame induction class also included seasoned Arizona Republic journalist John Davis; business industry leader and Ping Board of Director Doug Hawken; professional golfer and architect Tom Lehman and vice president of science and agronomy for Troon Jeff Spangler

For more information on the Arizona Golf Hall of Fame, visit www.arizonagolfhalloffame.com.