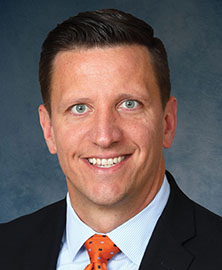 Tom, before joining the firm in 2014, becoming a partner in 2016 and named managing partner in 2019 – KOPPLIN KUEBLER & WALLACE – served in club management at some of the country’s most recognized private clubs. Tom’s club management career spans over 25 years in the private golf, country, and community club industry. He is currently serving as a Board of Director for the National Club Association.

Most recently Tom served as the General Manager/Chief Executive Officer for The Club at Mediterra in Naples, FL. He also applied his leadership skills for a decade as the General Manager/Chief Administrative Officer at Oakmont Country Club in Oakmont, PA, where the club, under his guidance, hosted three major championships in a seven-year period, including the 2010 U.S. Women’s Open, the 2007 U.S. Open and the 2003 U.S. Amateur. The USGA regarded the 2007 U.S. Open Championship as the “Gold Standard Open” for the modern era. Prior to that Tom spent fourteen years at The Country Club in Pepper Pike, OH.

In 2007, Tom received the Excellence in Club Management Award as the top performing manager, presented annually by McMahon Group, Club + Resort Business, National Club Association, and voted on by a panel of industry experts.

He has also been active in the Club Managers Association of America (CMAA) including numerous committee roles locally and nationally and served as the Pittsburgh Chapter President in 2010.

Tom speaks often at local and national CMAA educational events and has also presented internationally at the European Club Leadership Summit and the Club Manager Association of Europe (CMAE) National Conference. Tom is a faculty member of CMAA’s Business Management Institute I (BMI I) at Georgia State University and the recent recipient of the 2020 Gary Player Educator of the Year Award. Tom is currently the Chair of National Club Association’s Membership Committee and also serves as Secretary of the Board for Tee It Up For The Troops.

His experience in transformational leadership and recognized as the architect of some of the most loyal and high-performing teams of associates during his management days has provided countless clubs, managers, and directors with helpful and necessary clarification of goals, objectives and “club culture,” establishing outstanding platforms and metrics to success.